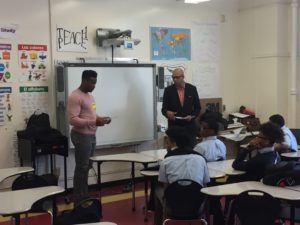 Whether you’re jubilantly darting around the playground or holed up in a classroom flipping through SAT flashcards, regardless of what year or level you’ve reached in your schooling, the U.S. education system maintains distinct disparities between Black and white students.

According to research conducted by The Guardian, Black students are nearly four times as likely to be suspended as white students, and nearly twice as likely to be expelled.

There are several different aspects that are responsible for this gap, including home environments, neighborhoods, and circumstances that are applicable to specific schools themselves that aren’t related to teachers at an individual level.

However, there’s no denying that there are notable discrepancies in the way that Black students are treated by their teachers and school administrators.

In this post, we’ll identify the lack of equal opportunities that exist within U.S. school systems—both systemically, and at an individual level:

Concerning public education specifically, a large explanation for why minorities experience unequal opportunities throughout their years spent in school is due to how the U.S. educational system is structured.

And, socioeconomic disparity is one of the major reasons for why there is racial inequality exhibited throughout schools in the U.S..

For example, discrepancies occur largely because not only are most U.S. public school districts run by local cities and towns, but they’re also funded by local property taxes.

Therefore, education is paid for based on the amount of money that is available for distinct districts, meaning that the funding needed to adequately teach students is not always available or procured for different schools.

Note that high-poverty districts spend 15.6% less per student in comparison to low-poverty districts according to the U.S. Department of Education. This lack of spending can not only affect a student’s learning opportunities throughout their initial years of schooling, but also can hinder their future goals as well, such as attending certain colleges or universities, or pursuing different career paths or advanced degrees.

How does this affect Black students specifically? Well, according to the National Center for Education Statistics, in 2014, the high school graduation rate for white ­students was 87% compared to 73% for Black students. So unequal opportunities in the early years of education can affect whether or not Black students complete school.

Although there is systemic inequality within different U.S. school systems, a large reason for why Black students do not receive the same educational opportunities as their white peers is due to unequal treatment displayed by their teachers and school officials.

Inequality in the Classroom Itself

In addition to socioeconomic status, another main reason for why there are unequal opportunities for Black students within the U.S. education system involves school staff members. A major cause for contrasting achievement between Black and white students is based on the differences in the qualifications of their teachers.

For example, predominantly minority schools skew large in size (reaching 3,000 students or more in most cities, according to Brookings Review), and the teachers are less qualified regarding their education levels, certifications, and training that they’ve conducted in the fields that they teach.

Additionally, there are subconscious racial biases that are exhibited by different individuals who maintain teaching positions. As a cause of this bias, teachers might be less likely to identify minority students who shine academically.

Studies have even shown that Black students are 54% less likely than white students to be recommended for gifted-education programs.

Paralleling how I discussed what it’s like to have a Black coach as an NFL player, according to the Journal of Public Administration Research and Theory, Black students are three times more likely to be referred for these types of programs if their teacher is Black rather than white.

Similarly to how Black players are able to relate to Black coaches more closely since they are more likely to understand their experiences, Black teachers share a similar empathy towards Black students.

There’s also a difference in treatment when it comes to disciplinary measures. The Civil Rights Data Collection maintains evidence that minority students face harsher discipline in public school settings than their white counterparts.

It’s no secret that in order to ensure that change is enacted, we have to work towards reforming the U.S. education system at both a systemic and individual level.

Furthering Our Conversation on Inequality

Even though racial segregation in public education has been illegal for 65 years in the United States, in the words of The New York Times, “The American education system is still largely separate and unequal.”

It’s time to ask ourselves how we can work towards fixing both structural and interpersonal inequalities in an effort to create an even, equal playing field.

One way to work towards this is through incorporating interventions to reduce teachers’ and administrators’ individual biases.