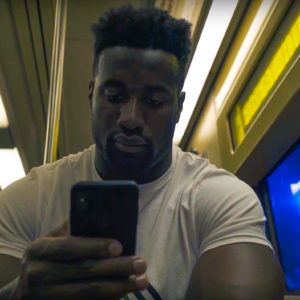 When someone tells you to picture what it’s like to work in financial services in the U.S., there are a variety of thoughts that come to mind—Suits and ties, long hours, large salaries, briefcases, wall street, and wealth might be amongst the first few.

However, an additional aspect that’s incredibly important to identify and review is the racial inequality that endures throughout different financial services practices, and the lack of equal opportunities for Black Americans in particular.

Let’s discuss a few events, some of which are very recent, that exemplify the systemic racism that exists amidst different organizations and individuals within the financial services space:

Racial Discrimination in the Banking World

Regardless of whether you’ve read about it in The New Yorker, The Wall Street Journal, Bloomberg, or The Washington Post, it’s no secret that there’s racial discrimination in the U.S. financial services sector, specifically towards Black Americans⁠. WNYC Studios even describes this systemic problem as a “long and pervasive legacy.”

Between favorable interest rates, home mortgages, and even basic financial services, for years Black Americans have experienced unequal treatment in comparison to their white counterparts, which has continued to widen the growing wealth gap in the U.S..

In fact, researchers for the National Bureau of Economic Research found that Black mortgage borrowers were charged higher interest rates than white borrowers and were denied mortgages that would have been approved for white applicants.

Big banks have found themselves in large lawsuits for perpetuating racial inequality. Some have recently paid restitution to Black employees for keeping them separated and isolated from white peers, situating them in the poorest branches, and barring them from career opportunities.

For example, in 2012 Wells Fargo paid $175 million in race discrimination probe and in 2013 Bank of America was fined $2 million for unequal treatment towards Black job candidates.

Although securing definitive proof of racial discrimination has been a difficult challenge to overcome concerning these lawsuits, there have been several recent incidences that exemplify racial inequality in the financial services sector at an individual level.

Before the death of George Floyd and the protests that have transpired in the ensuing days, there was the viral Amy Cooper incident which occurred twelve hours prior to Floyd’s passing, twelve hundred miles away.

Cooper, who was a portfolio manager for Franklin Templeton, was walking her unleashed dog in Central Park when a Black man who was also strolling through the park asked her if she could put her dog on a leash.

Her response, which was caught on video, was to call the police and claim that, “There is an African American man, I am in Central Park. He is recording me, and threatening myself and my dog.”

Forty-eight hours later, in an unrelated story, a venture capitalist named Tom Austin saw a group of Black men in his Minneapolis building’s private gym and threatened to call the police on them after accusing them of not being allowed in the building.

Similarly to Cooper’s display, Austin’s questioning was recorded via video. According to Business Insider, Austin began by saying, “I’m a tenant here. Are you?” followed by, “What office? What office are you in?” and eventually culminating with “I’m calling 911 then.”

Both of these occurrences are examples of racist behavior conducted by professionals in the financial services space. What makes these instances particularly disheartening is that there’s a high likelihood that both individuals were aware that calling the police on Black men could have resulted in their deaths.

It’s important to consider how Cooper and Austin’s racial biases influenced their professional lives, since their stigmatization must have had an impact on their colleagues, clients, vendors, and business partners, whose careers could have been negatively affected as a result.

If you look at leadership lists from most financial organizations, you’ll find that there are few Black executives. But racial inequality isn’t limited to financial companies’ key stakeholders—Black customers and clients are frequently profiled and questioned over simple transactions. 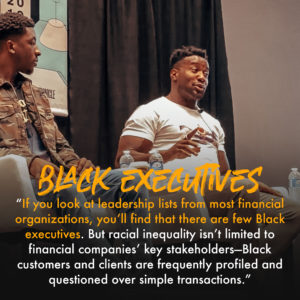 Kennedy, who earned $13 million during his nine-year career as an NFL player, is someone who you’d believe most banks would love to have as a client. However, when Kennedy attempted to become a “private client” at JPMorgan Chase, he kept getting, in the words of The New York Times, “the runaround.”

When he showed up at his local JPMorgan branch in Arizona, he received this explanation as to why his request was being avoided:

“You’re bigger than the average person, period. And you’re also an African-American. We’re in Arizona. I don’t have to tell you about what the demographics are in Arizona. They don’t see people like you a lot.”

By recording the conversation and sharing it with The New York Times, not only did Kennedy expose what racism sounds like in the banking industry, but he also preserved a record of unequal treatment that may have been dismissed as imagined or misinterpreted.

These instances mentioned above are only a small handful of examples showcasing unequal opportunities for minorities in the financial services space.