How Football Experiences Will Change During the COVID-19 Outbreak

It’s no secret that both athletes and their fan bases are itching to return to regular, live sports seasons that were scheduled pre-COVID-19.

As we head into summer, there’s still a lot that’s up in the air regarding what football itself will look like in the fall of 2020. In fact, some have even questioned if there will be an NFL season in 2020 at all.

Although the NFL has released the 2020 regular-season schedule, one thing is for sure: game day won’t appear the same for both players and fans alike.

Let’s take a closer look at what players’ and viewers’ experiences could be like during this upcoming 2020 season:

The Player’s Perspective: Coping with a Lack of Fans in the Stands

As a player, I can admit that the game day experience is going to be completely transformed—and not necessarily for better.

While viewers at home have their game day rituals⁠—whether it’s making a special, homemade nacho cheese dip or putting on a “lucky” sweatshirt⁠—we, as players, look forward to that moment when we emerge out onto the field and our cleats first touch the turf, regardless of whether or not the stadium is our own home team’s.

If you’ve been tuning into the news lately, you’ve probably already seen how other countries are pivoting in order to continue to hold live sporting events. In particular, Taiwan and South Korea have shown how they’ve adapted their live games amidst COVID-19 complications with fake fans in their stadium stands.

Believe me when I say that the fans make a big difference. For teams with strong fan bases, such as Seattle and Kansas City, I’ve been wondering how those players will feel without their fans surrounding them. Additionally, I’ve been questioning how it will feel to play in away games against teams where the crowd is usually roaring around us.

Not having spectators present during game day will definitely impact players’ morale, and could have an affect on the competitive spirit that’s exhibited during each game. For some players, the money might not be enough of a motivating factor to play at their usual pique performance levels.

The Spectator’s Perspective: What Game Day Will Look Like While at Home

So, you’ve probably been wondering: how will the 2020 NFL season feel for folks watching the games while at home?

Although it’s heavily debated, in my opinion, unless it’s a special event, such as the Super Bowl or a playoff game, watching football from the comfort of your own home can be just as enjoyable as viewing a live game at your home field—particularly as the fall season progresses and the weather gets chillier.

From the fan perspective, watching live games in 2020 could feel like the equivalent of watching training camp scrimmages—more stripped-down with less fanfare. For example, will there be a halftime show? And if so, will it be virtual?

On the other hand, the at-home viewing experience could be better than anticipated, since fans might now be able to get more insight into what’s being said on the field as players communicate with one-another while playing. Additionally, emptied stands could give way to increased angles that the game can be filmed from, which would in turn mean more colorful commentary.

Regardless, it will be interesting to see how the lack of in-person fans will affect both the energy on the field and at home. 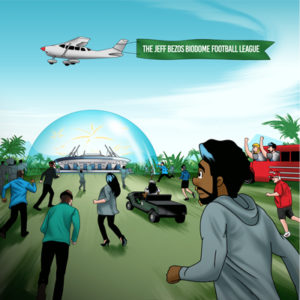 Tackling Changes to the 2020 Season

As we all continue to tackle changes caused by COVID-19, it’s important for both players and fans to maintain a team mentality.

Although events this upcoming fall may not occur as originally predicted, we need to adjust accordingly and remain grateful that the 2020 NFL season is still on the table.