Addressing Changes to the Rooney Rule 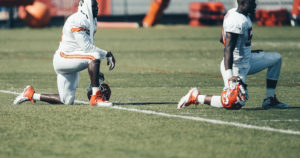 You may have missed it in the flurry of Covid-19-related news announcements and articles.

Or, maybe you’ve cut back on content consumption since quarantine restrictions became enforced.

But as of mid-May, the NFL is instituting changes to Rooney Rule.

To give a bit of background context regarding the rule’s history, the policy is named after former Steelers owner Dan Rooney, who was credited with spearheading the effort.

So, what does the Rooney Rule claim, exactly? Officially adopted in 2003, the Rooney Rule is an NFL league policy that requires teams to interview ethnic-minority candidates for head coaching jobs. And since its implementation, the Rooney Rule has expanded to include general manager positions as well.

Highlighting a positive example put into effect by the rule, in January 2007, Mike Tomlin became the head coach of the Pittsburgh Steelers.

However, more generally, the rule has two important flaws:

Although the rule appears to be making a seemingly positive, cultural step, you’ll notice that the policy solely focuses on interviewing: there is no hiring quota or hiring preference given to minorities, only an interviewing quota, which means that the rule needs work.

From a statistical perspective, even at its highest point, minority representation among coaches was a meager 25%. And although 70% of NFL players are black, the number in leadership positions is less than 10%.

In a workplace in which the overwhelming majority of players are African American, the NFL has many more opportunities to strengthen the rule and further increase diversity in its management ranks.

The Newest Changes Being Made to the Rooney Rule

Considering that just 3 of the past 20 head coaching openings have gone to minorities, the Rooney Rule has been largely ineffective.

Concerning its latest alterations, the NFL has proposed that the rule will be changed as follows:

It’s important to note that ESPN has also disclosed the following in regards to the Rooney Rule’s latest updates:

“The owners considered a proposal that would have improved teams’ third-round draft picks by 6 or 10 spots if they hired a minority candidate for vacant GM or head-coaching openings, as well as other compensation for hiring minority candidates for such positions as quarterbacks coach.” (Source: ESPN.com)

Since the rule is being changed to claim that if a minority coach is hired, a team will have a better draft position, not only does this defeat the purpose of the rule itself, which is to advance minority hires, but it also objectifies minority coaches by putting them in a position where they’re forced to be perceived as pawns for a team’s advanced draft standing.

Additionally, the changes being made to the rule could call minority coaches’ credibility into question because when a minority coach is hired, players will question their qualifications and whether they got the position due to the draft benefits.

What We Need to Address About the Rule

Although the specter of fines was instituted to serve as a deterrent to teams violating the rule, the NFL needs to address “sham interviews.”

One way that this could be done is by requiring teams to provide transcripts of interviews with minority candidates to ensure that they are in-depth and meaningful versus another item being “checked off of a team’s to-do list.”

Covering more potential candidates under the rule would appear to be a logical next step, such as including coordinators. And with more minority coordinators, there would likely be more minorities in the hiring pipeline for coveted head coaching positions.

Since white position coaches and assistants are more than twice as likely to be promoted to coordinator than their African American counterparts, it’s high time for the playing field to become leveled.

What Should Be Considered

What we really should be asking ourselves is, “Why does the Rooney Rule exist in the first place?” Meaning, we need to face the fact that racism is prevalent in the NFL, and the rule exemplifies it by acting as a microcosmic example for how African American players are accepted in the league.

By making a concerted effort to prioritize diversity when filling NFL coaching positions, the player experience will change in a positive way. For example, black players will be able to relate to black coaches more closely, since they are more likely to understand and empathize with their experiences.

Above all else, the NFL must make representation and visibility priorities so that the league can practice what it preaches.